February 24, 2013
The Raspberry Pi is a cute little computer. Quite cheap at $35, you plug in USB keyboard+mouse and a TV as monitor. And it is surprisingly capable, even for running 3D games.

One particularly interesting game is Minecraft: Pi Edition. As in other Minecraft versions, the main goal is to create a world. But unlike other versions, you can not only use the tools provided by the game, you can make your own tools! That's because it comes with a programming interface.

The Minecaft world is made of little cubes, and you normally place or remove these blocks by hand, one after another. This is fun, but for larger structures also quite cumbersome. For example, this rainbow here might take a long time to construct manually: 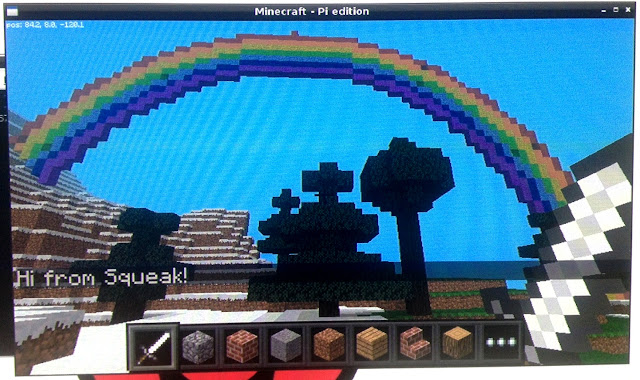 But I did not make the rainbow by hand. I programmed it, using the Smalltalk programming language. It's just these dozen lines of code in the Squeak programming environment: 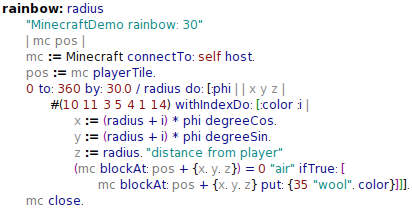 Squeak is already installed on the Raspberry Pi, because Scratch was made in Squeak. Of course you need a little more to make this dozen lines of code work. Mojang (the developers of Minecraft) have provided "bindings" for the Python and Java programming languages, but not for Smalltalk. So I had to make these bindings first.


Here are the Bindings

Now you can use the bindings too, because I am publishing my code:

Squeak can either run on the Raspberry Pi itself (a VM is already installed) or on another computer in your network.

There are two packages, 'Minecraft-Pi-Base' and 'Minecraft-Pi-Demo', load them in this order. At the time of writing, the demo package has only the rainbow method in it. The code is not heavily commented, but from the examples it should be fairly obvious how to use it.

The bindings are still somewhat basic, but cover all the functions of the current Minecraft-Pi 0.1.1 release. There is certainly room for improvement. E.g. it would be nice to add symbolic block names, so you could write "wool" instead of "35". And the hit testing (when you right-click on a block with your sword) works, but could be made more convenient to use, perhaps by introducing an event class like in the other bindings.


I made the repository open, so anyone can easily contribute. I'm curious what others will come up with.   Like, control Minecraft from Etoys or Scratch? How about a Croquet bridge? Build a little game? In any case, have fun! :)

Unknown said…
I like to see people that keep SmallTalk alive. I've been thinking about learning it just for fun.
February 25, 2013

Dave Mason said…
Does this only work for Minecraft-Pi? What's the difference between it and Minecraft-Mac or Minecraft-Linux?

Vanessa said…
Dave: Yes, out-of-the box it only works on the Pi. Minecraft Pi is a special edition of Minecraft specifically made to be programmable by providing an API. It is a derivative of the Minecraft Pocket edition (and compatible with that, so you can join the Pi world from e.g. an iPhone).

On Mac or Linux that API can be emulated by installing a bukkit server with the raspberryjuice plugin. Reportedly my Squeak bindings do indeed work with that, too.
March 15, 2013

Eric Clack said…
This is a great library. I'm going to use it in my local geek club and get the kids to program Minecraft rather than just play it. I've expanded on your post a bit for the club here:
http://ericclack.blogspot.co.uk/2014/03/programming-raspberry-pi-minecraft-with.html

...And added a few more demo methods and committed them to Squeak Source: to draw a table, and trees.
March 29, 2014

June 15, 2010
In preparation of making Etoys work on the recently announced OLPC tablet , I ported it to the iPad. Here is a video —read on below for some details: This might look exciting, and it certainly is, but it feels actually a lot more clunky than it looks. You may have noticed the little target circles I added whenever a finger touches the screen. That's to know where exactly the finger hit. It's really hard to hit anything, took me a while of training to hit the colorful halo handle buttons on first try. We really need to redesign the user interface before giving this into the hands of kids ... But for now, some technical details:  John McIntosh  ported the Squeak Virtual Machine to Apple's touch-based OS last year (source available at  isqueak.org ). I modified it slightly to enable multi-touch and keyboard input. Also, I rewrote his code to deal with touch events in Squeak, and added multi-touch handling to Morphic. Fortunately, Morphic was designed to handle multiple
9 comments
Read more